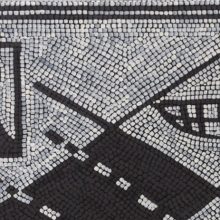 HABÍAN: SOBRE EL PASTO UN MULO, JUNTO AL MULO UN HOMBRE Y EN EL HOMBRE UN MUERTO [THERE WERE: ON THE GRASS, A MULE, NEAR THE MULE, A MAN, IN THE MAN, A CORPSE]

SEEKING TO DO BATTLE, ABOVE SEEKING TO FIND FIRMER FOCUS, WHERE, HOW? 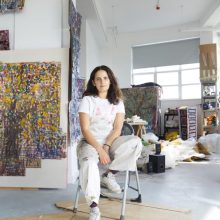 Francisca Sosa López is a Venezuelan artist who lives and works in London. In 2015 she received a BA in Fine Arts and a BA in Art History from the University of Colorado, Boulder USA.

Born and raised in Harare, Nyaude is one of the most successful of Zimbabwe’s younger generation of painters.

A FUNNY KIND OF TRUCE

HABÍAN: SOBRE EL PASTO UN MULO, JUNTO AL MULO UN HOMBRE Y EN EL HOMBRE UN MUERTO [THERE WERE: ON THE GRASS, A MULE, NEAR THE MULE, A MAN, IN THE MAN, A CORPSE] - Christian Camacho

HABÍAN: SOBRE EL PASTO UN MULO, JUNTO AL MULO UN HOMBRE Y EN EL HOMBRE UN MUERTO [THERE WERE: ON THE GRASS, A MULE, NEAR THE MULE, A MAN, IN THE MAN, A CORPSE] - Christian Camacho

SEEKING TO DO BATTLE, ABOVE SEEKING TO FIND FIRMER FOCUS, WHERE, HOW? - Christian Camacho

SEEKING TO DO BATTLE, ABOVE SEEKING TO FIND FIRMER FOCUS, WHERE, HOW? - Christian Camacho

In a world that has been entirely redefined in recent memory, what is the state of the relationship between old world centres and their globalised, postcolonial counterparts? How have these relationships been recast along cultural, economic, and social lines in the new world order? Derived from the title of the classic 1966 postcolonial novel Season of Migration to the North by Tayeb Salih, Season of Migration draws into dialogue the work of three artists whose careers have brought them to occupy the amorphous, often fluid middle-ground between centre and periphery. Specifically, Camacho is Mexican, working in Mexico, but educated in London; Sosa López is Venezuelan, but educated and working in London; and Nyaude is Zimbabwean, but has exhibited extensively throughout the United States and Europe. Coming from these varied contexts, Season of Migration looks to interrogate the artistic products of living – both intellectually and literally – between traditional and emergent sites of globalised production in today’s world.

However, despite important historical records concerning labor extraction, resource depletion, and the subjugation of local populations, Season of Migration resists an insistence on directions of influence – either from periphery to centre by way of colonial appropriation, or conversely, from centre to periphery through postcolonial paradigms defined by exertions of “soft power.” Indeed, the globalisation of art and culture has necessitated a reformulation of binarised conceptions of power and influence, making claims to legitimate “centres” obsolete. Thus, this exhibition seeks not to explore how Camacho, Sosa López, or Nyaude share in, repurpose, or counter the predominant norms of Western art, but instead how these norms exist among a range of influences that themselves take from, introduce to, or entirely disregard Western imperatives.

For Grove Collective, this signals an important turn towards a global outlook; both Jacob Barnes and Morgane Wagner have sought to program an exhibition that is as much an intellectual as it is a visual offering, encouraging viewers to ask questions that extend beyond the walls of the gallery. Moreover, it poses an opportunity for the gallerists to share in exploration with the viewer: both Western-raised and -educated, Barnes and Wagner look to expand their own outlooks beyond that which is familiar, and encourage the viewer to join in this process of re-evaluation and re-education, taking cues from artists who are necessarily well-versed in both Western and non-Western cultures and artistic traditions. In turn, both Barnes and Wagner have begun comparable work through their subsidiary project, Backhaus Projects, and look to continue using both gallery and project programming to inform an internationalised outlook.

Christian Camacho (Estado de Mexico, 1985). Painting MA, Royal College of Art, London, UK. Visual Arts BA from ENPEG [National School of Painting, Sculpture and Printmaking] ‘La Esmeralda’ of the National Institute of Fine Arts, Mexico City, Mexico. His work has been shown in Mexico, Europe, the United States of America, and in South America in collaboration with institutions such as Museo Experimental El Eco, Museo de Arte Carrillo Gil as well as at the Royal College of Art and Imperial College in London, Palais de Tokyo in Paris, The Phoenix Art Museum and Museo Jumex in Mexico City.

Francisca Sosa López is a Venezuelan artist who lives and works in London. In 2015 she received a BA in Fine Arts and a BA in Art History from the University of Colorado, Boulder USA. She later returned home to Caracas until she moved to London to pursue her MFA in painting from the Slade School of Fine Arts (2020). Her practice is focused on painting while exploring materiality and processes as a means of communication. Her work is deeply influenced by her country and the various ongoing crises, especially migration. Looking to showcase what is home for her, Sosa López’s work explores colors and gestures inspired by music and nature. She is the recipient of the Provost Purchase Prize for UCL East, 2020 and the Adrien Carruther’s Award 2020/2021, and was nominated for the Almacantar Studio Award 2020, along with being selected as one of Saatchi Art’s Rising Stars 2020.

Born and raised in Harare, Nyaude is one of the most successful of Zimbabwe’s younger generation of painters. His dramatic and satirical paintings, based on visualisation of Shona proverbs and contemporary urban slang, defy characterization shifting with restless energy between readily identifiable symbols, abstraction and surrealism. His gesturally rendered effigies of idioms make the political deeply personal and the personal poignantly political. While responding viscerally to the issues in his own environment, as a painter, Nyaude also puts himself in conversation with broad ideas about art and history of painting, drawing his influences from Bosch and Bacon to Malangatana and Basquiat.

Nyaude’s work has been exhibited globally with museum and gallery shows in Shanghai, London, Paris and Cape Town as Harare. In 2018 he took part in the New Museum Triennial, his work is found in notable public and private collections including the Smithsonian National Museum of African Art, Museum of African Contemporary Art Al Maaden, Rubell Family Collection, Jorge Perez Collection and Yannick & Ben Jacober Foundation.